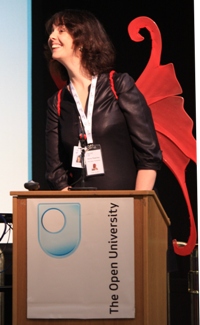 There can’t have been many conferences in the World yet where people’s name badges include images of their avatars. This sometimes weird crossover between real and virtual worlds began with comments such as “Hi there! I expected to see your name hovering above your head” and an introduction by conference organiser Anna Peachey resplendent in a pair of wings.

As usual I’m scouting for interesting educational applications and after sitting through a lot of presentations on day 1 of the conference the overwhelming answer to the question above (for me anyway) is “How do you improve the social element for distance learners?” A quote from one student (relayed by Anna) sums it up nicely:

In another session Shailey Minocha and Rita Tingle discussed the importance of a sense of presence and a sense of place which are harder to achieve in a 2D environment. They also suggest from their research that activities in Second Life don’t actually enhance learning in themselves but by creating a sense of community and common purpose they can build motivation in learners which then leads to better learning.

Another theme which cropped up in several talks was the role of “play” in learning. Edward Castranova in his keynote pointed out that most online gamers are middle-aged females (rather than spotty teenage male geeks). Meanwhile Maggie Savin-Baden from Coventry reports that students think play is important but perceive that staff think it’s a distraction from learning. And Kath Trinder from Glasgow Caledonian has noticed that staff feel guilty about being in Second Life when they’re at work; they feel that somehow it can’t be real work.

Many of the talks also covered issues of identity. When Kath discusses Second Life with students they tend to refer to their avatars as “it” but after a while they begin to call them “me” and use phrases such as “I’m doing this”. The avatar becomes an extension of the self and people in her Glasgow evening classes call each other by their avatar names. Kath feels that people’s identity is more real in Second Life somehow than in their Facebook presence.

Other people I’ve talked to describe how they’ve experimented with changing the appearance of their avatars until they find something they’re happy with. After a while the sense of identity with their virtual representation becomes so strong that changing its look in any significant way becomes inconceivable.

There is no doubt that virtual worlds are enhancing social contact and quickly become as real to their participants as “real” communication. If you don’t believe this think how much we believe we’re hearing someone’s voice when we pick up the telephone. It’s just a reproduction of their voice transported in multiple ways through complex communication networks but we con ourselves into thinking we’re actually hearing their voice.

Edward Castranova quotes Gartner’s prediction that by 2011 80% of web users will use an avatar and have a “second life”. Social contact in virtual worlds has many advantages for distance learners but Edward also predicts that it’s going to contribute to a collapse in population. For obvious reasons.