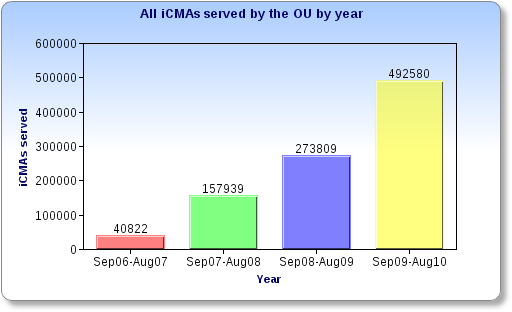 Year on year use of online assessment is nearly doubling here at the OU. In the last year around half a million quizzes were delivered to students in our virtual learning environment using a combination of the Moodle quiz engine and the University’s in-house OpenMark system.

The use of the e-assessement tools for summative purposes (affecting the final mark for a module) has risen to around 16% of all quizzes delivered.  Meanwhile a new question engine for Moodle has been pioneered by Tim Hunt and Phil Butcher and is scheduled for release this December.  Phil says “the new engine has a crispness and consistency that inspires confidence” and he’s pleased to “wave farewell to many of the inconsistencies of the old engine”.

Enhancements planned over the next year include: