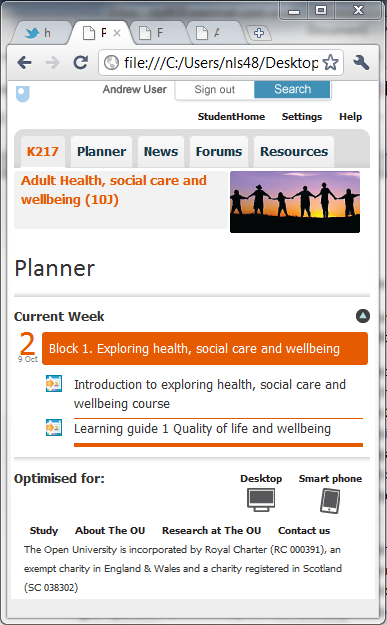 I’ve just had some interesting conversations at an event for new OU module chairs at Cranfield University after presenting on some of the possibilities of elearning for our students.

One academic wondered how he could be expected to design courses for smartphones and tablets when the University was not prepared to buy him these devices – and wouldn’t even upgrade his operating system to Windows 2010 from Windows 2003. Well he clearly had an axe to grind on the latter issue, justifiably perhaps, but he may be missing the point: the tools are primarily server side and all he needs to access them both for authoring and consuming is a web browser. Also if he develops content using our XML-based structured content system the module websites that he creates should automatically look good on a smartphone, tablet, laptop or desktop – without him having to do anything different for each platform.

Some of these devices do of course have clear affordances which may facilitate learning experiences only possible on that device – and necessitate alternative designs for different platforms. Thus writing an essay on a smartphone doesn’t make a lot of sense but learning applications involving geo-spatial awareness may well do. Similarly the touch-screen interface of an iPad makes it much easier to manipulate images than using a mouse with your desktop PC. So a visual learning activity designed for a tablet might not work on a desktop.

There is a very good argument that this lecturer will never be able to see the pedagogic potential of these devices unless he not only gets them to play about with but takes personal ownership of them and uses them in his daily life.

However another argument that occurred to me this week is that we only ever see significant adoption of technologies for teaching and learning when these are already commoditised. Thus while early adopters pioneered the use of the web browser for teaching in the mid ‘90s it was only a few years later when most people were googling for information and shopping online that the web really began to take off in education.

Similarly we’re now getting 10% of our students accessing our online systems from mobile devices on a regular basis. The number is growing rapidly but probably more because smartphones are taking off in society than because we’re providing useful podcasts and websites optimised for small screens.

I’ve seen a big change in attitudes over the past few years. As the internet encroaches on many aspects of life, and people become ever more used to googling, social networking etc, there are few people who don’t recognise that there must be at least some benefits of studying online. No longer do people say “Why is the OU moving online?” though there are reasonable objections of course to studying online exclusively. The innovators and early adopters need to keep pushing the limits but should we accept that most of our innovations will have minimal impact on learners until similar devices and applications are mainstreamed in society?