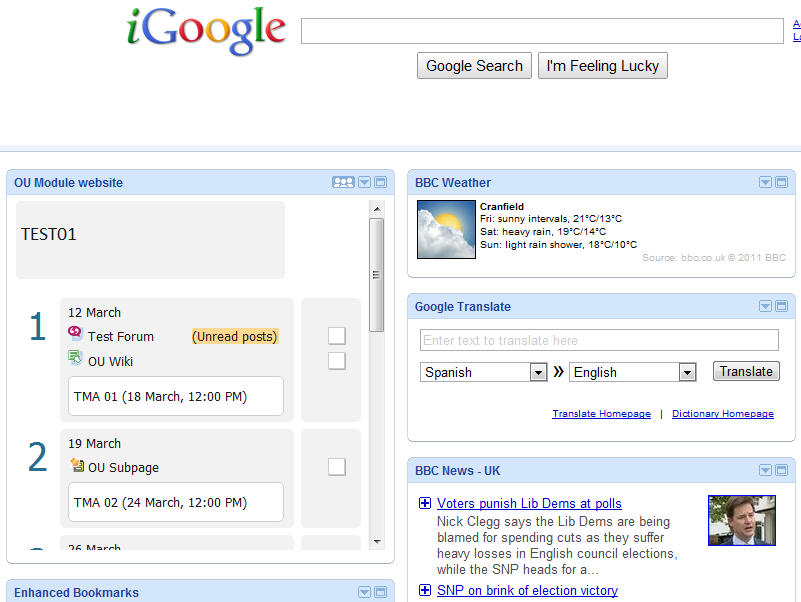 Fed up being force-fed a whole lot of stuff of no great interest to you in your university’s virtual learning environment? Want to view only the parts of most relevance to your own learning – and blend them in with your other interests such as news, weather and sports updates? The Open University is now moving closer to that vision with a series of “widgets” or “gadgets” which take parts of the OU VLE and make them available on other platforms.

The developments have been made possible with a grant from JISC for a project called DOULS (Distributed Open University Learning Systems). The first prototype gadget, built by project developer Jason Platts, makes the module planner from the Moodle module website available to students in iGoogle. Jason has built the authentication module which makes it possible for the gadget to communicate with Moodle. At the moment this is a one way flow of information from Moodle to the gadget, however future versions will enable updates to data held in Moodle via the gadgets.

Future gadgets planned for development are:

The idea behind all this is to allow users to work in the environments most comfortable to them and not to be forced to visit an institutional website all the time, which might not be configured in the way they want it.  Learners will be able to create their own dashboard including updates to do with their formal learning as well as anything else they’re interested in. We’re also investigating the development of similar applications in Facebook and LinkedIn. All the code will be made available freely to other institutions.

An additional benefit is that we may be able to use the functionality of the other platforms to make possible something that can’t be done solely in the VLE.

Of course many students may prefer to visit the VLE in its entirety and they’ll still be able to do so. There are also possible reasons why institutions might not want to lose them entirely from that environment – such as them potentially missing out on guidance and support, news items or knowledge of new courses. However overall it has to be a good thing to give control to learners over exactly what they want to see and in which environment they want to see it.  The VLE is not dead but merely fading away into the background.