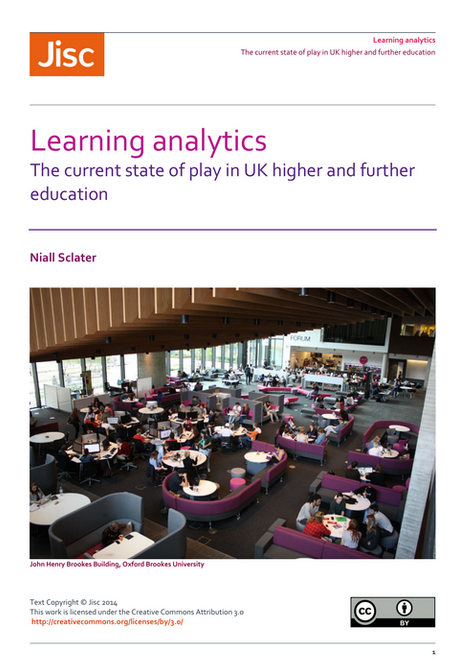 Jisc today released a new report: Learning Analytics: the current state of play in UK higher and further education.  It was written after a series of visits I made recently to universities and colleges across the UK which were known to be carrying out interesting work in learning analytics.

I was inspired by campuses filled with enthusiastic freshers out enjoying the late summer sunshine and no doubt largely unaware of the technological innovations underway aimed at enhancing their chances of academic success.  Indoors I had fascinating discussions with some of the staff who are pioneering the use of the new technologies in the UK.

Various things struck me as I carried out structured interviews at each institution.  They varied tremendously in their organisational structures and approaches to education, and hence in their motivations for using learning analytics.  Increasing retention for example was vital for some of them while others, who didn’t have huge problems with student drop-out, were more interested in improving the learning experience, the tutor-student relationship or the institution’s scores in the National Student Survey.

It was also interesting to discover just what an early stage the UK is at in its use of learning analytics.  The activities discussed ranged from general business intelligence and the monitoring of key performance indicators, to tools which predict students at risk of failure, to systems which help manage the workflow around staff-student interactions.   The distinction between academic analytics and learning analytics which some commentators have attempted to make didn’t really seem to apply – most people see the data as part of a continuum which can be used by people at all levels of the institution.

The approach to gathering data for learning analytics varies widely across the institutions too.  Student information systems and virtual learning environments provide the bulk of the data.  But one of the most surprising findings is that there is little common ground among the participating institutions in the analytics systems they are using.  This seems to confirm the nascent state of the technologies and the lack of consolidation in the marketplace.  Contrast this with the market for VLEs where Blackboard and Moodle dominate.

Most interviewees were reluctant to claim any significant outcomes from their learning analytics activities to date.  Several mentioned the strong correlation they have found between physical attendance and achievement.  Others found that a significant outcome of the analytics work has been improved connections between disparate parts of their organisations.

When asked about future plans, most institutions were planning to consolidate the use of the systems they had recently put in place but would also be integrating new data sources and improving the presentation of dashboards. There was a strong desire as well to put tools in the hands of students so they can better monitor their own behaviours and performance.