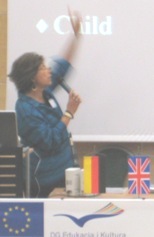 One of the key philosophies behind the OU’s MyStuff and eportfolio initiatives elsewhere is that students should have complete ownership over their content. This is a vital concept which should help to nurture a sense of pride in the student in the materials they assemble and the ways in which they can present them. But “ownership” isn’t that simple.

I’m at the ecoMEDIA-europe Conference on ePortfolios and Open Content in Katowice and have been prompted to think more about this during various presentations, including a keynote by Evangeline Harris Stefanakis (left) from Boston University.

It’s all very well to say a student “owns” their eportfolio but their institution is likely to control the eportfolio system and its functionality, provide the templates into which students are supposed to slot their content, and host and back up the students’ work. Assessors also have to have access to parts of it at times.

Evangeline’s research with schoolchildren demonstrated that where parents are given access to eportfolios the quality of materials improves dramatically. If this is confirmed by further studies it gives huge impetus to the eportfolio movement in general. But this is not perhaps because kids are so concerned about what their parents think but, according to Prof Stefanakis, because teachers can’t afford to allow materials to sit in eportfolios which don’t show improvements in their students’ knowledge and understanding. Portfolios make learning – or the lack of it – highly visible.

So it’s my eportfolio. My school provides the system. My teacher tells me what to put in it and which things I should leave out. My Mum and Dad can look at it and tell me if they’re happy with what I’ve done. Some of it will be assessed and used to help decide my future education and career. I’ll take it with me to university and later give it to my employers who will host it for me to see if I’m learning the things they want me to. It’s my eportfolio – is it?