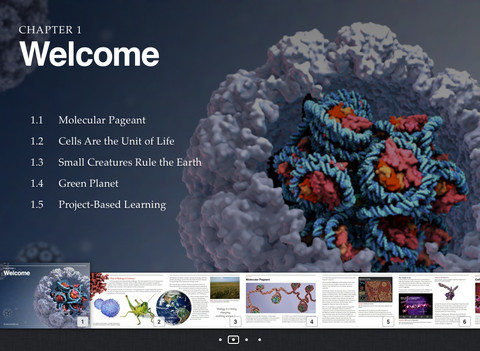 I’ve finally managed to install iBooks 2 and the example book “Life on Earth”. This was a frustrating process that took two and a half hours of upgrades and downloads, requiring the right versions of iOS and iTunes with various reboots of both the PC and the iPad. Arguably I should have upgraded to iOS5 long ago but I didn’t when it was released because of allegations that it wasn’t robust.

On the first attempt to “read” the Life on Earth iBook the app hung and I had to reboot the iPad – again. On the second attempt it crashed during one of the interactives requiring me to start at the beginning.

When it worked it was an enjoyable experience with beautiful images, useful videos and informative interactives – and you can envisage the transformational effects this kind of experience will have for millions of learners in the very near future. There’s nothing that isn’t already done through applications on PCs or via web browsers but a few things make it inherently better on a tablet: portability, use of the touch screen for interaction and page turning, the book metaphor itself rather than the browser metaphor which frequently requires vertical scrolling, the feeling of immersiveness you get because it’s not within a browser window, and no need for internet connectivity once it’s downloaded.

My inclination was however to “play”, looking for the next fun thing to do rather than to read the text. Presumably many learners, particularly those who’ve grown up without reading much, would act in the same way.

To be really useful in education on a massive scale a few things need to be sorted out with iBooks 2:

1. The bugs need to be fixed so the app actually works – or the entire slickness of the user experience is wrecked. It’s surprising that Apple released an app with such fanfare which falls over so easily (at least on my iPad).
2. Players need to be developed for web browsers, android tablets etc.
3. Authoring tools need to be developed for other platforms too so you’re not forced to buy a Mac.
4. You must be able to get hold of the books without going through the iTunes Store.
5. The iBooks 2 format needs to be as open as ePub. Fellow tweeters assure me that it is based on HTML5 and JavaScript but I’d be very surprised if these books work seamlessly as they don’t even work properly on Apple’s own app.

Given the incredible commercial success of tying in the iPad so closely to the iTunes store numbers 2 to 5 aren’t going to happen any time soon which leads me to think that an enhanced ePub-type competitor format which runs on and can be developed on all platforms, and distributed freely, is necessary.