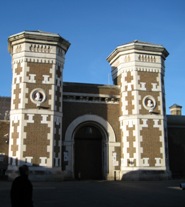 Experts in offender learning were brought together yesterday at the Open University in a COLMSCT Colloquium organised by Anne Pike. The presentations from Germany and Sweden in particular were of great interest as they’re further ahead than in England and Wales, where most of the other participants in the session were based.

Lena Axellson and Bengt Wallin reported that Sweden has 54 of its 57 prisons hooked up to a national network allowing students moving from one prison to another to carry on studying seamlessly – their electronic files remain accessible and their teacher stays with them. Students are provided with thin clients and communicate with their teacher in a “virtual room” where the teacher can deposit materials and communicate with the student via a forum. There is also a local mentor for the student in each prison. In England, in contrast, many students drop out when moving around due to different policies in each prison. Critically, Swedish students have individual study plans based on the career they want to pursue when they get out – and 25-30% of them are enrolled in courses.

Giving students access to parts of the Internet which are not strictly controlled would give nightmares to many prison governors but what can you do if the course requires students to search for materials online? In Sweden those students undertaking higher education courses can get a network connection but a teacher has to log on at the same time to monitor what they’re doing. The Swedish taxpayer may be footing the bill for this but there seems to be a very clear correlation between education in prisons and reduced re-offending so it may be money well spent.

Professor Juergen Friedrich of Bremen University discussed his vision of how prisoners incarcerated abroad might be able to join a virtual classroom in their own country so that they can study in their own language and obtain qualifications recognised in their country. He also reported on the success of peer teaching, that this helps encourage social responsibility and fulfilling commitments such as punctuality and reliability. His comment that got everyone sitting up however was that in Norway and Denmark, Internet access is seen as a human right which should be granted to prisoners by default unless there is good reason not to!

We’re a very long way from that here, and I’m told that in some of our prisons there will simply never be internet access, however there was a real sense of optimism among the delegates, and some tangible progress being made towards opening up controlled access to parts of the Internet with initiatives and organisations such as POLARIS and Meganexus.